Here is Rais Khan's first LP from 1968. I think it has been re-released in various forms but probably not a good quality. Whilst there was a fair bit of surface noise on this vinyl it's still quite enjoyable after a little bit of light post cleaning. I though the info on the back cover was pretty interesting, so will copy it here also.

"Born in 1940 at Indore, Rais Khan is perhaps the youngest to occupy the rank of stalwarts in the art of sitar-playing. His father, Ustad Mohammad Khan, himself an accomplished sitar and been (veena) player, initiated him into the art at the tender age of two. A toy sitar made of a coconut shell fascinated the child and this was the beginning. The progress of the child was surprising and, at his debut in a concert hall, at the age of five, he was hailed as a child prodigy by a distinguished audience presided over by the wife of the then Governor of Bombay. Since then it has been an onward march towards greater progress and at twenty-seven today, Rais Khan is acclaimed as a sitar-wizard. This success has been achieved by him after several years of intensive training, perseverance and an overwhelming desire to carve out a niche for himself in the domain of Indian classical music. And he has done It! The ragas Todi and Kedara with which Ustad Mohammad Khan initiated his son into the art were practiced by Rais Khan for over ten years until he mastered them to the satisfaction of his father."

"Side II of this disc opens with the raga "Todi". Rais Khan has a very rich heritage both from the paternal and maternal sides which probably explains his extraordinary proficiency at such an early age. From the father's side his lineage can be traced to such musical luminaries as Ustad Haddu Khan, Ustad Hassu Khan, Ustad Nathu Khan, Ustad Baboo Khan of Indore, Ustad Rajabali Khan of Dewas and Ustad Murad Khan, who in his days was known as a maestro on the been. On the mother's side maestro Vilayat Khan is the real maternal uncle of the young artist. No wonder Rais Khan has risen so fast and has dazzled and baffled music critics and music lovers all over the country by his remarkable proficiency. One perceives in his style a predominance of the "Gayaki Ang' (way of singing). All the gimmicks a vocalist is capable of producing are at the finger-tips of Rais Khan. It will not be an exaggeration to say that in his hands, the sitar sings in the style of an accomplished vocalist."

"He has toured extensively all over India and has performed in the Western and Eastern countries of the world as well, as a member of cultural delegations sent to these countries by the Government of India. In a grand conference of musicians from all over the globe, at Warsaw, in 1955, Rais Khan was adjudged the best instrumentalist from among the Indian group. Out of one hundred and eleven instrumentalists, only six were awarded gold medals. And Rais Khan was one of them. He has thus won a large number of admirers in foreign countries as well as in India. His frequent appearances at the various stations of All India Radio and in the music conferences are eagerly looked forward to by his fans. This first Long Play disc of Rais Khan is sure to establish him as a disc-artist of top calibre and since he has a very long and bright future, we are hoping to bring to you successive recordings by him to provide listeners with first-class entertainment. The tabla accompaniment by Ustad Basheer Ahmed Khan deserves a special mention for the very able support given to the artist."

Tracks:
A - Raga Jhinjhoti
B1 - Raga Todi
B2 - Lokpriya Dhun 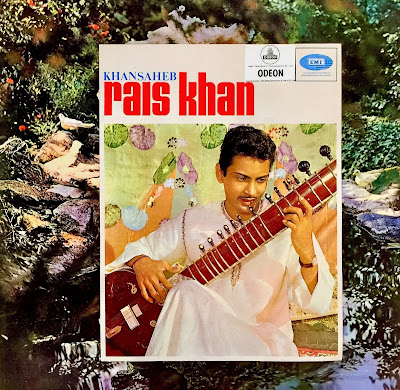 Digitised with: Project Essential II Turntable, Ortofon Red Stylus, recorded as WAV 16/48 in Audacity and saved unaltered (apart from track separation/info tags) as WAV 16/48, and then separately edited with: Clickrepair (low settings) then slight reduction on surface noise + normalised to -1.5db in Audacity and exported as WAV 16/48 and MP3 320kbps.
Posted by Kirrin at 23:49

The music made available on this page are mostly commercially unavailable in a modern accessible format to the best of my knowledge, and are meant to promote artists and labels. If you like this music, please try to buy the original! There is no commercial intent in this blog. If you are (or represent) either the original rights holder or one of the performers in these recordings and wish me to delete the download links, please contact me directly through the comments section or email and the download links will be removed.